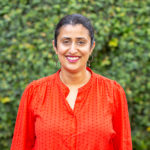 This post was co-authored by Malika Anand and Thea Sokolowski.

After more than a decade working in financial markets, Monica decided to leverage her experience to change the way low-income Brazilians save and manage their money, and help them transition from debt to savings. Today, she is CEO of Catalyst Fund portfolio company Grão, an app that allows Brazilians to transfer money from their bank accounts into a savings account in real time and with no minimum requirement, helping them save toward their goals, R$1 at a time.

Monica is one of just four female founders in Catalyst Fund’s inclusive fintech portfolio, which historically has dominated by male, expat founders. While this is something we are actively working to change – and making progress with our latest cohort, composed of predominantly local founders and 33% female founders – it is unfortunately in line with industry trends, as discussed in our latest Evaluation Report.

After accelerating 25 inclusive fintech companies (and another six underway), we at BFA Global have noted that women who start fintech businesses – or any businesses for that matter – face outsized challenges when raising funding. A study found, for instance, that in the US, funding awarded to startups with all-female founders stands at just three percent of the total, and that funding for teams with at least one female founder reached just 15 percent. Furthermore, when female founders receive investment, they receive over US $1 million less on average than their male counterparts.

Yet, according to a study from a major global consulting firm, “businesses founded by women ultimately deliver higher revenue—more than twice as much per dollar invested—than those founded by men, making women-owned companies better investments for financial backers.”

Part of this mismatch may be because only 9.65% of decision-makers at U.S. venture capital firms – those who control this funding allocation – are women. According to Monica, this is a critical factor that needs to change.

In our first blog in a series featuring our female founders, we sat down with Monica to get her take on the differences between male and female leaders, why we need more female investors on the other side of the table, and how she’s helping women in Brazil gain control of their finances with Grão.

Monica says she chose to launch Grão because she wanted to make a difference for low-income customers. Prior to launching Grão, her team conducted extensive field research, during which she learned that, “Most people don’t invest for two reasons: they don’t think they have enough money to save or to invest, and they don’t know how to do it.” Monica was inspired, noting,  “[Based on this insight,] I chose to create Grão – one product, just a savings account with no minimum. It’s not like the brokerage house, where we just wanted to make money. For me, it’s not about money – it’s about creating something better.”

One area in which Grão is clearly leading the market is designing a product that works for women, recognizing both their roles as household organizers as well as their preference for commitment devices.

Targeting women is not new in this industry. Microfinance providers have tended to target women because they have higher repayment rates and also contribute more of their income to household consumption. However, women have different needs and preferences for financial services and face significant barriers to inclusion. Recognizing this, organizations globally are finding ways to support products designed to better serve the particular needs of low-income women. DFS Labs, for instance, awards The F3 (Female Focused Fintech) Prize to the most innovative digital financial products that are narrowing the gender gap in financial inclusion.

Monica knows that serving women customers is different because they are often managing their entire household’s finances. Today, 50% of Grão’s users are women. She notes, “For women that make more, their husbands manage their money. Women who make less have to manage their own money. [Since we serve the low-income market,] our women customers save for the whole family, not just themselves.”

The app provides an easy way for women to save for their entire family and to work toward concrete savings goals, which they can input into the app. Research shows these mental accounting and soft commitment devices are particularly helpful for women savers.

Working in a female-led environment

Serving women is just one part of the Grão puzzle. As a female CEO, Monica also embodies many of the strengths women leaders bring to the table.

Although Monica feels she and her male counterparts are equally sensitive to serving women customers, she does note a difference in management style. “I feel men are equally capable of worrying [about family issues] and able to empathize with customers. But the difference is when it comes to managing the team.”

Where Monica really sees her strength as a female leader is in her management style. She prides herself on taking the time to ensure everyone always has a voice and an equal opportunity to express their opinions.

“Before they decided to invest, one of our investors did a workshop all day with me and my team. Their feedback to me was that they could see everyone on the team was able to speak – everyone had a voice. [I believe] this is correlated with me being a woman. [On my team,] everyone can speak.”

Monica also works to ensure everyone feels connected and informed. “My team feels comfortable. It’s not just a place to work and get a paycheck; we talk about everything – family, children.”

She refers to her first (all-male) hires as her co-founders – despite the fact that she hired them after starting the business. “For me, they’re partners. They’re very proud to be co-founders. It makes them feel very empowered,” she says. She notes that she hopes to hire more women, but that it is hard to find strong women candidates in the finance and tech sectors.

This level of openness also extends to managing the business. “For sure I don’t have all the answers,” she admits. “And it’s okay – it’s important – that the team knows that, because I’m not perfect. I can be a leader, but it’s not just me growing the company. We have to build it together.”

It may be that this degree of transparency is difficult for male leaders, who face cultural barriers to expressing vulnerability. In Monica’s experience, “[For women,] it’s possible to fail. For men, it’s hard – and hard to share vulnerabilities. [Women understand that] it’s possible to fail, and it will be ok. It’s ok to be transparent about our own limitations. I have never heard this from a man.”

Connecting with other women in finance

Aside from management style, one of the notable differences Monica has found as a female founder are the interactions she has had with investors. She has found herself constantly pitching to a room filled with men – and often, the only woman in the room. Yet, when it came time to fundraise, it was the lone female investor who impressed her most.  Mirroring her own strengths as a women CEO, this investor proved to be a great listener and strategic advisor.

“The biggest part to fundraising as a woman is that you’re always pitching to guys. All the time. Because of my background in the financial market, I’m used to it – but why? I think there should be more women investing. [Many] more.”

For her most recent funding round, Monica worked with two investors. One was male, from a social impact-focused VC, and the other was female, from a traditional VC. “The traditional VC was a woman. She was good – much better [than the men]. The conversation was much better. It’s easier to talk with her. As well, she listened. She was not always judging. She said, ‘Ok it’s understandable, the phase you’re at.’ But most of them are just looking at your numbers. She tried to understand if I can think bigger and have a vision.”

While this easy rapport made Monica feel comfortable and understood, the investor also showed real strength when she needed to – especially when it came time to sign the term sheet. “She did a really good job. I don’t know if it’s [related to] gender, but at first I thought I was her friend. Until the term sheet came out – then I said, ‘Oh!’ She was tough. She’s a real investor. It’s easy working with her now, but I have to remember all the time that she’s an investor, not my friend.”

Although the finance industry is very often biased against women (see also here), Monica’s experience further illustrates the strengths women contribute to the work environment. This VC’s ability to simultaneously make Monica feel at ease and heard, yet also demonstrate real strength and negotiating prowess as an investor, helped Monica recognize the importance of having more women at the table.

Monica feels one reason for gender bias from investors is that men present themselves as overly confident, which might lead investors to view them as stronger. In addition, they may also be falling for CEO stereotypes: “Investors invest in founders who look like their image of a CEO (typically male and white) and fund businesses they understand — which leads them to underestimate female founders and under-value of businesses that target female consumers.”

Though it was a difficult road, Monica has secured funding for her new venture. She remained honest and open with her investors throughout the process, even if that meant hearing more “no’s.”

“Women don’t over-promise,” she explained. “I don’t know where the company will be in a year. I want someone to invest and help me figure that out. I felt some investors looked at me like I was a weak person [because of that]. I’m not like guys who come in super confident.”

“I really believe that if my male partner and I were presenting the same company,” she added, “they would invest in him. Just because he’s a guy.”

As Catalyst Fund looks ahead, we are determined to surface and reframe these kinds of issues via our Circle of Investors, and by supporting more high-potential women founders like Monica as part of our future cohorts. We believe that female founders bring something special to the table — all the way from product design, to team management, to pitching investors — and we hope to more profoundly support and showcase their work going forward.  Keep up with our learning and progress here.